Sleeping in a Treehouse in Bardia National Park

In the middle of the night we wake up by a loud roar. Is it a tiger? Or is it a male spotted deer?  We quickly reach for our binoculars and we peer into the forest , illuminated by the moon.

Since spring 2017 there is a fantastic treehouse situated in the Khata corridor south from Bardia National Park. Only 6 km away from our home. It is one of the favourite places where our guests like to spend a night. The treehouse is surrounded by grassland and dense bushes and riverine forest. A great habitat for rhinos, deer, elephants, tigers and many species of birds.  Budhi and I love to stay here ourselves as well and end of May 2019 we decide to go here again.

The summer is starting in Bardiya. The day temperature rises up till 38 degrees. But in the treehouse an evening breeze is cooling us down. The veranda is a perfect place to enjoy your food and drinks in meanwhile enjoying the view on the grassland. With our binoculars we already spot some nice peacocks and bee-eaters and we hear a woodpecker drilling a hole in a tree.

The ranger of this forest is joining us for dinner and his eyes are as sharp as an eagle.  “Look” he says. At the edge of the forest we spot a group of 20 spotted deer who are quietly grazing.  And then we are startled by a loud and deep roar. A big male spotted dear appears on the grassland, proudly walking towards the treehouse. It is mating season and the males compete for females.  About 7 months later there will be many newborn deer. And that is necessary will the Bengal Tiger survive. The spotted deer is his favourite prey and he eats about one per week. But he also loves a wild boar and 4 of them are roaming around the treehouse this evening.  The ranger tells us that lately a female tiger with 4 cubs has been spotted in this area. It confirms that according to the tiger counting survey in February 2018, the tiger population in and around Bardia National Park is increasing. The present population is 87. 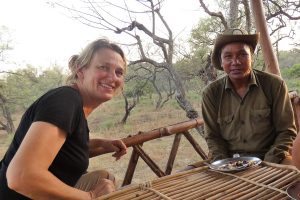 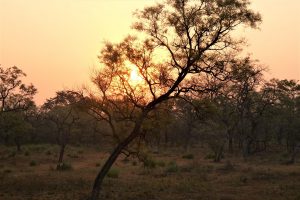 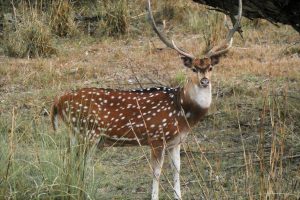 The area around the treehouse is also an ideal habitat for the rhino. In the afternoon or in the early morning you can make a 2 hours walk (or longer) with the ranger and our guide in this community forest.  You literally follow the trail of the rhino, which means the tracks in this forest are made by rhinos and not by humans. The ranger looks for fresh rhino dung and pee, the place where the rhino slept and his footprints.  There is a good chance to have an encounter with this great animal. But also herds of 20 to 30 elephants who move from India to Bardia and back, walk through this forest every 6 weeks. A few times our guests were lucky to see them while sitting safely on the veranda of the treehouse.

Around 7.30 PM the sun set makes the sky glow orange and red.  We put on a little light so that we do not chase away the animals. This time of the year we sleep under a mosquito net outside on the veranda. But when it is colder you can also sleep on the top inside the house. There is room for 4 people.

Just before midnight we wake up by a loud roar. Is it a tiger? Or is it a male spotted deer? We quickly reach for our binoculars and we peer into the forest. The moon illuminates the field and  silhouettes of the trees stab against the sky where many stars are watching over us.  A peacock screams like an angry cat. And at the same time the deers start to beam. A signal that the tiger creeps around. But unfortunately the tiger doesn’t show his majestic stripped body to us.

In the morning singing birds wake us up and we enjoy a beautiful sunrise.  Once again we had an amazing time in the treehouse and we decide to come back soon.  We can also organize this experience for you including a 2 hours jungle walk in the forest with ranger and guide and a dinner with candle light! 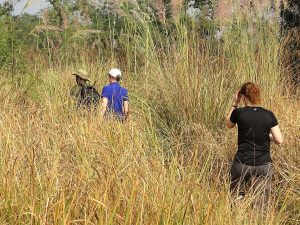 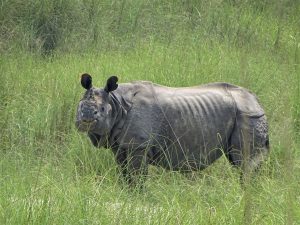