During the night we mostly hear the peaceful sounds of nature, such as the chirping crickets and very early in the morning a crowing cock. But every now and then we wake up by loud and anxious cries of people, who live on the river bank of the Geruwa river. This river separates the village and Bardia National Park.

Last week the loud cries of people came back, because two male Asian elephants living in Bardia National Park decided to cross the river to search for females and food. The electricity fence, which runs along the river to repulse the wildlife to enter the populated area, is many times not working due to a lack of electricity power. This allows an elephant to enter the populated area very easily.

Let’s talk about the females first. Only a 10 minutes walk from our home you will find the Elephant Breeding Center or locally called the ‘Hatisar’, where about 12 domestic elephants live. And yes most of them are female. Around 4 o’clock in the afternoon the wild male elephants started to walk along the river and just before sunset (7’o clock) they crossed the river to mate the females in the breeding center. Last week this happened several evenings in a row. The staff chases the elelefant back into the park. But then the elephant is hungry and comes back to search for food.

All though there is enough food available inside the park, the elephant loves to search for a delicacy. And that is rice, wheat and corn. When it is time to harvest the grops he likes to visit the fields in order to eat. At the moment the corn is almost ready and very tasty.

But this giant of the park doesn’t hesitate to take more drastic actions. In his search for food he is also looking for stocks rice, wheat and corn, wich is stored inside the houses. The thin walls of clay and bamboo from which houses are built, are not resistant to the tusks and primal force of this elephant. For the inhabitants a very fearful situation.

By shouting and using fire torches the people try to scare away the elephants. But last week this didn’t seem to help. After a number of nights army intervention was necessary. By the unloading of gunshots in the air, they tried to chase the elephant back into the national park. But these elephants seem to be more agressive and not afraid of the people. Last night they came closer to the village, walking on the main roads and destroying some houses on their way.

The residents love nature and respect the elephants a lot, but in this case there is a big tension between the inhabitants and the wildlife. What to do to chase them away for a longer time?
The only good thing about the whole situation is that in 22 months from now you can admire some lovely new baby elephants in the Hatisar. 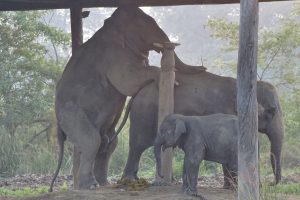 Visit from wild elephant to the Elephant stable in Bardia